The  300 aac blackout (designated as the 300 BLK by the SAAMI[1] and 300 AAC Blackout by the C.I.P.[2]), also known as 7.62×35mm is an intermediate cartridge developed in the United States by Advanced Armament Corporation (AAC) for use in the M4 carbine. Its purpose is to achieve ballistics similar to the 7.62×39mm cartridge, or even more similarly, the 7.92×33mm Kurz cartridge in an M4 while using standard M4 magazines at their normal capacities. 300 BLK ammunition cannot be used in a rifle chambered for 7.62×40mm Wilson Tactical.[3] It is mainly derived from the .300 Whisper concept, but differs in having been submitted to the SAAMI.

While 5.56×45mm NATO has enjoyed widespread acceptance in military circles, the nature of the missions encountered by some special operations groups often demand a round that provides better performance than that available in the high-energy, standard velocity rounds, and subsonic performance greater than standard 9mm (the ubiquitous pistol round also commonly used in many SMGs).[4]

To meet this demand, AAC developed the 300 AAC Blackout in cooperation with Remington Defense. The new cartridge was intended to negate many of the perceived drawbacks inherent to other large caliber cartridges used in the M4. Colt Firearms and other arms makers had previously chambered AR-pattern rifles and carbines in various .30 caliber rounds but encountered problems. In the case of the 7.62×39mm, its relatively severe case angle caused feeding issues unless specially modified AK-47 magazines were used, and even then results were unsatisfactory.[citation needed] Modified bolts were also needed owing to its larger case head diameter. Rounds such as the 6.8 SPC and 6.5 Grendel had similar parts-interchangeability issues but did allow for the use of the standard M4/M16 30-round magazine, albeit with a reduced capacity.[5] 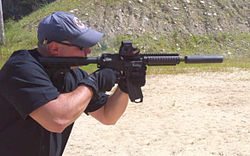 Wildcat cartridges such as the .300 Whisper series addressed these issues, but their widespread use in single shot handguns and lack of industry standard cartridge dimension meant that a great number of the popular loads on both the supersonic and subsonic end of the spectrum were less than ideal in the AR pattern weapons. Many of these rounds required an excessively long overall cartridge length that would prohibit feeding in a STANAG magazine while using powder charges that were not compatible with the pressure requirements of the M4 carbine. This was particularly noticeable when using subsonic ammunition in conjunction with a suppressor as short stroking and excessive fouling would occur similar to that which was seen in the earliest variants of the M16 in Vietnam.[6]

By keeping the M4/M16 in mind as the primary host during load development the designers could work up a host of cartridges that not only satisfied the ballistic requirements set forth, but also ensured mechanical reliability with the fewest changes to the weapon itself—with only a simple barrel change necessary for complete conversion.[7]

Robert Silvers, director of research and development for AAC said, “We started development in 2009, but most of the work was done in 2010. A military customer wanted a way to be able to shoot .30-cal. bullets from an M4 platform while using normal bolts and magazines, and without losing the full 30-round capacity of standard magazines. They also wanted a source for ammunition made to their specs. We could not have just used .300-.221 or .300 Whisper because Remington is a SAAMI company, and will only load ammunition that is a SAAMI-standard cartridge. We had to take the .300-221 wildcat concept, determine the final specs for it, and submit it to SAAMI. We did that, and called it the .300 AAC Blackout (.300 BLK).”[8]